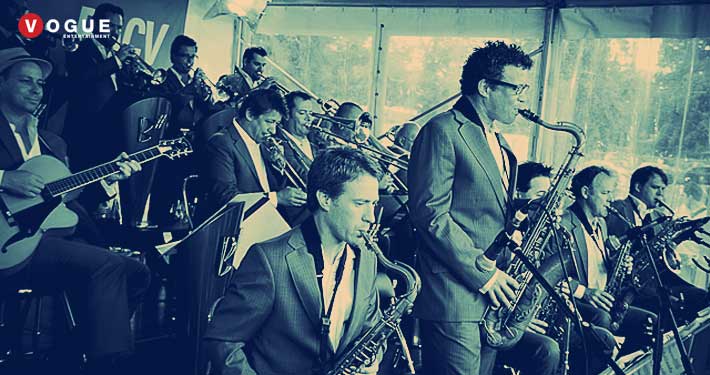 The B Sharp Big Band is Melbourne’s most exciting swingin’ Big Band – just ask their biggest fan, James Morrison! They’re bringing a fresh, invigorating sound to Melbourne and casting a spell on new audiences with every performance. The B#(sharp) sound has certainly got feet a-tappin’ and hearts a-poundin’ all over town!

The founder and manger, Henry K, was keen to pull together some of Australia’s best individual jazz performers to perform the classic arrangements of Basie, Ellington, Goodman, Miller and other Big Cats of the 30’s, 40’s & 50’s. Many of the arrangements B Sharp Big Band has acquired, or had carefully arranged, are well known classics! Some have for many years been ‘lost’ classics, not performed by other Big Bands around Melbourne, and rarely in Australia, if at all.

B# are determined to resuscitate these infectious tunes with a fresh twist, exposing new audiences to the lush, invigorating sound that made Big Band swing addictive to swing ears then, and now again.

To effectively perform these exciting and complex tunes, B sharp has cajoled some of the most passionate musicians of international standing to lend their expertise and talent. The band understands the important nuances of Big Band swing and what sets it apart. The lion’s share of B sharp ‘s arrangements are for a 17 piece Big Band – and they take’ it to the stage that way, just as the original arrangers intended. That means a big, slick, energised sound, with more than a nod to the particular acoustic style of the era. In addition, a 10 piece version of the band, known as the ‘B# Big Combo’, delivers a punchy, swingin’ sound where smaller spaces or smaller occasions prevail.

From the moment the curtain draws back, the band’s striking presentation – consisting of full, new, 1940’s style outfits and their custom built, deco inspired music stands – gives the audience a taste of what’s to come. But it’s only after one considers the exceptional talent that dons each outfit and occupies each stand, that the full exciting potential of this band is realised.

The band has hosted the ‘cat’s pajamas’ of vocal talent, including Nina Ferro, Emma Franz, Julie O’Hara, Dave Williamson, Eugene Hamilton, Fiona Thorn, Frank Benedetto and David Dean (aka Dean’s Martini). David Campbell, Ross Wilson, Jane Clifton and Joe Camilleri have also featured as guest vocalists. And speaking of honoured guests, James Morrison has performed with the band on several occasions and has had this to say about them:

“When I’m in Melbourne, there’s only one Big Band I want on stage with me – B#!”

“Melbourne hasn’t known a swinging Big Band like this for a long time!”

Little wonder B Sharp Big Band has previously been invited to launch The Melbourne International Jazz Festival and perform for many significant corporate functions. (A list of these can be provided on request.) In addition, the band has performed live to air on ABC radio, and staged many public performances. Their sparkling presentation and performance standards have been right at home at prestigious venues such as The Forum, Ormond Hall, Crown Palladium, The Park Hyatt and The Grand Hyatt.

In addition to James Morrison’s endorsements, testimonials are available from clients and venue managers that the band has worked with. B# also has strong relationships with experienced and reliable suppliers of services that allow the band to shine, including a highly qualified sound engineer, stage management crew, dance performance troupes, graphic designer and photographer.