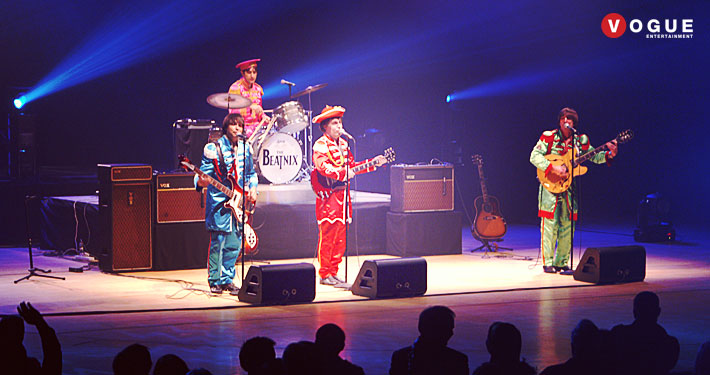 Hire The Beatnix for your corporate event or festival. They are Australia’s longest running an most authentic Beatles Tribute Show.

The Beatnix show includes fully authentic musical instruments similar to those used by The Beatles. These include very rare and valuable guitars by Gretsch, Hofner, Rickenbacker and Gibson, Vox AC30 guitar amplifiers and a Vox AC50 bass amplifier with a T60 bass cabinet. The drums are identical to the ones used by Ringo, a 1960’s model Ludwig Black Oyster Pearl kit. The Beatnix have the real vintage equipment.

This combined with a range of early period Beatle costumes and the colourful Sgt Pepper’s Lonely Hearts Club Band outfits give you the complete Beatles experience. You will believe you are seeing the real Beatles.

How To Book A Top Beatles Tribute Band

The Beatnix concept was conceived and assembled in March 1980 by founding member Tony Dean as a live performance entity. This puts it amongst the longest running Beatles Tribute Shows in the world. It is certainly the premier Beatles Show down under. Through the years band membership has rolled over, thus retaining the fresh young sound whilst maintaining the experience of the management.

The Beatnix Show has performed internationally with seasons in Hong Kong,Malaysia, Bangkok and New Zealand. Domestically from large venues [ ARL Grand Final at the Sydney Olympic Stadium 100,000+ people] to smaller intimate bookings, [50 people in a back garden setting in Surry Hills].

There have also been many television performances including Hey Hey Its’ Saturday, The Midday Show, Good Morning Australia, The Don Lane Show, Ernie and Denise, Simon Townsends’ Wonderworld, Donnie Sutherlands’ Sounds, and appearances at Beatle festivals in Adelaide, Melbourne, Auckland and four Beatlefests in Sydney.

The Beatnix have also been professionally recorded on the noteable “It’s for you” lost Beatles tracks album, “Stairways to heaven” with the “Money or the gun” album and numerous T.V. and radio commercials including The Soothers ad, Arnetts Shapes, Browns Choc and you may have seen the”Hertz” ad with the guys [complete with bass drum] in the print media.

Hire The Beatnix for your corporate event or festival. They are Australia’s longest running an most authentic Beatles Tribute Show.