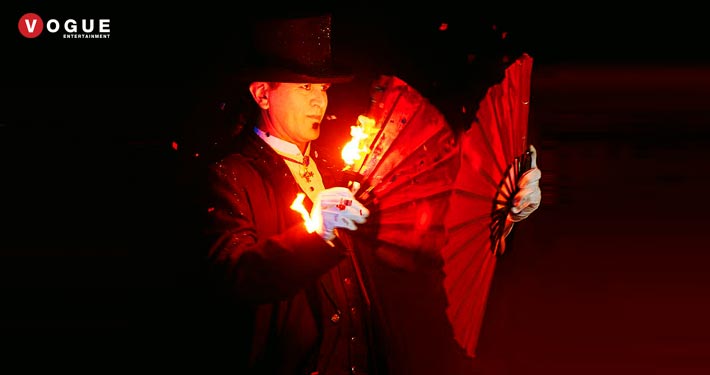 Ever wondered about being levitated? Ever thought what it would be like to be cut in half, to escape from a straight jacket while hanging upside down high above the crowd, to breathe fire and swallow razor blades?

As a small child Duck Cameron imagined performing these and many more amazing illusions that adults and children throughout history have marveled at.
At the tender age of six, while traveling with family throughout Europe Duck Cameron was presented with a magic trick by his father.
After many hours practicing the classic ‘cups & balls’ he was smitten with the idea of becoming a Magician.
Upon returning to Australia Duck continued his new found hobby, saving pocket money for new tricks and books on the ancient craft. At age 11, Duck joined a magic school set up by two elder magicians called ‘The Young Magicians’ where he and fellow young students were taught not only magic, but staging and presentation skills. During this time Duck performed as a contestant on ‘Young Talent Time’, a family variety television show. At only 12 years of age, Duck won heat after heat, placing him in the Grand final. This same year Duck’s efforts were noted by fellow magicians who voted him 2nd place winner of Stage Magic at the 19th Australian Convention of Magicians.

Duck continued his interest in magic and with the encouragement of master magicians Ross Skiffington and Sam Angelico took the final step of turning professional and within a very short time was performing with the likes of Marcia Hines, John English, Boom Crash Opera, Chocolate Starfish, Wendy Mathew and Shirley Bassey. He has performed privately for John Farhnam, James Reyne, Molly Meldrum, Ross Wilson, Nigel Mansell, politicians worldwide and even Indian Royalty!
In 1999 the American Consulate General flew Duck all the way to Korea to perform one hour of close-up magic for his guests!

He has also won the prestigious ‘Ken Littlewood Award for Stage Magic’ placing him amongst the top in his field and making all those long hours rehearsing in solitude worthwhile.

In 2004 Duck was invited to compete in an all expenses paid Magic Competition in China. This competition was televised in front of an audience of 1,200 and of the 10 International Magicians invited, not only did Duck carry away the title of ‘Most Entertaining Act’ but was the only performer to receive two ovations. Once during his performance…the other for his curtain call!

He has spent the past 3 years performing on cruise ships around the world and consistently received guest ratings of between 97 – 98.8%. He is also one of only two magicians in the world to have traveled
regularly for Hyatt Hotels internationally performing close-up magic for guests.