One of the world’s most original and engaging magical entertainers, Ben Murphy is known for his unique comedic twist on magic and illusion.

From breaking world records to having had more TV specials internationally then ANY other Australian Magician, Ben Murphy has done it all. No matter the size or budget, Ben has the comedy magic and illusion. 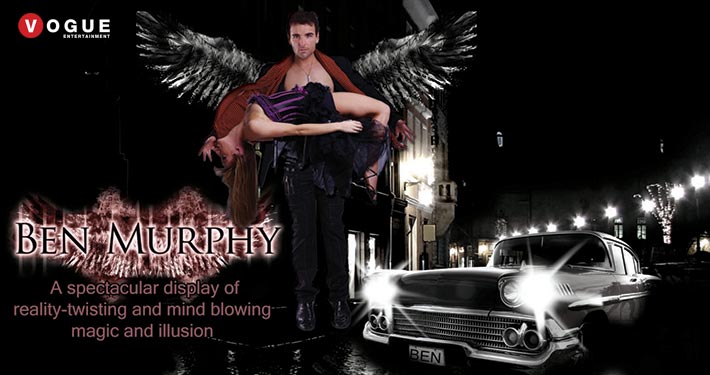 Unlike some of his colleagues that have come from popular TV shows like  America’s Got Talent or  Britains Got Talent, Ben has built his career steadily for a long time to achieve success on over 5 international prime-time television shows which featured his live performances. He has performed in Las Vegas, London, Melbourne, Sydney among other great cities of the world. They say that a magicians greatest strength is an empty fist along with a set of workings, tools and a magician’s bag, but Ben has some big secrets, colourful costumes and magic hands.

Performing the infamous “Houdini Chinese Water Torture Cell”  more times live than any other performer in history, Ben has broken the World Record and and even beaten Houdini himself!

How to hire Ben Murphy for your event.

Ben is in high demand across Australia and for overseas events as he is among the top magicians of the world. Don’t delay your inquiry. Call 1300 296 133 or contact us here today.