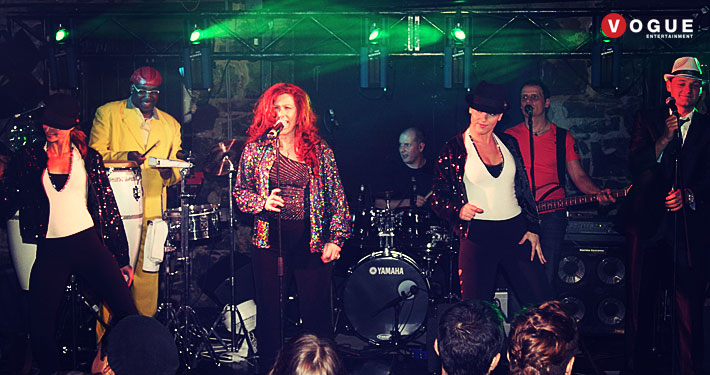 Through careful research and rehearsal, they have put together the best musicians to form Bustagroove. With the look, costumes, dance moves and an amazing sound, the show is a theatrical experience which is sure top take you on a memorable journey and keep you dancing.

Bustagroove has the reputation for turning any event into a real party! The 10 piece band is made up of some of the best musicians in Australia

THE SHOW features songs from soundtracks:

LUCY GALE
Lucy Gale is an extraordinary singer/performer. She is the voice behind many TV ads such as Tatts Pokies, Linda Blankets etc, and has been a headline act all over Australia, performing with artists such as Bob Valentine,
Marcia Hines, Mick Pealing, as well as many TV appearances. She is irresistible on stage leaving audiences transported to another realm. She has been a mainstay of the funk band Grand Wazoo and is currently a feature act
at Bennets Lane.

JASON STAN
Jason has been the main act for Coca Cola, ANZ, Tri-Star Ent., to name a few. He is internationally known and is one of Australia’s highest selling independent artists. A renowned songwriter, Jason is signed to record
new albums for the next few years. Also an accomplished actor, he is the face seen in movies such as Jackie Chan’s Nice Guy and Hotel de Love, as well as parts in Blue Heelers and Neighbours. Jason has just finished a 2-year
contract performing with his band at Birdie O’Reillys.

JOHN TONEY
John Is an amazing performer and also plays percussion. Hailing from Chicago, John spent many years in LA where he performed and recorded with artists like Stevie Wonder and Al Green. He was part of the “Buddy”
cast and toured with the show for 2 years. John is in huge demand as an entertainer and actor and has performed with the very best acts in Melbourne including The Motown Show and Grand Wazoo.

HAYLEY DIMMAK
Hayley Dimmak Is an incredible performer who has just finished working the last 3 years all over the world, courtesy of Princess Cruises. Hayley is multi-talented featuring in State Theatre productions to Cheerleading for NBA
and NBL as well as singing in a trio for various corporate events.

CARA TUNSTALL
Cara Is in great demand as a dancer and model for the elite in the corporate world such as Grand Prix Ball, L’Oreal, Toyota, Melbourne Fashion Festival etc. She has also appeared in shows such as “Neighbours”
etc.

CHANTELLE JURINOVIC
Chantelle Is also making a name for herself in the industry- she features in the McCafe commercial and the Dodo Internet commercial, both currently running nationally. She has danced and performed for high profile Corporate clients such as Melbourne Tigers, Toyota, Tattersals etc

BOB MINSHULL
One of the premier guitarists in Australia he has worked with local and international acts such as Men At Work, Colleen Hewitt, Cliff Richard, and Shirley Bassey, to name a few. Bob is a ‘master’ of the guitar and
has a waiting list of students who want to learn from him. Bob has also recorded as a successful singer and songwriter.

HENRY DINER
Henry Is the keyboard player and has played in many of Melbourne’s best bands over the years, ranging from 70’s bands Madder Lake and Skyhooks, to the band ‘Moondance’ which has been one of the top corporate
bands in Melbourne over the last few years. He is one of the originators of Bustagroove and is its MD.

HAYDN MEGGITT
He is the drummer and comes from Perth. Haydn has credentials such as touring with WA Jazz legend Helen Mathews as well as playing 5 nights a week with Perth’s very best bands for many years. He has
supported artists such as Macy Gray, Spacious Couch (Canadian Funk) and Joe Cocker.

BARNEY LOVELAND
Barney Is an exciting bass player, and, since relocating from Queensland last year has been in great demand for his talent. Some of the artists who have sought his playing are Glen Shorrock, Don Burrows, Karen Knowles, Peter Cupples and the Drifters, to name a few.