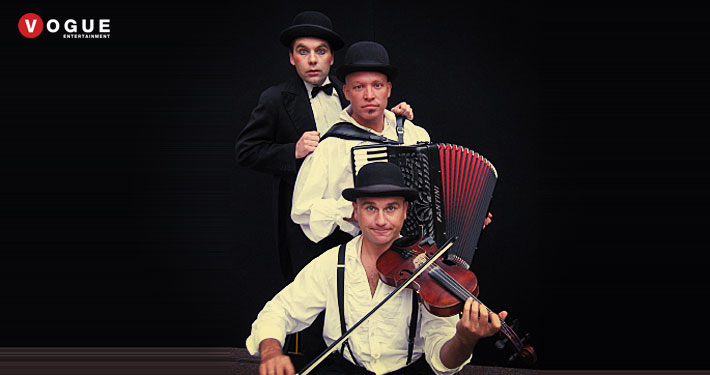 Together in the spirit of wandering minstrels, The Rosetski Brother Show consists of juggling, ballooning, unicycling, magic tricks and other gags, accompanied by violin and piano accordion delightfully synchronised improvisations. These three cheeky bards will woo you with their charm and captivate you with their unique spontaneity, as they use their considerable talents to weave a brillant dialogue of comic wit.

The Rosetski Brothers Show ‘Mime Your Own Business‘ can be performed as a duo or a trio.

Leo Bonne originates from France, where he studied at the Annie Fratellini Circus School in Paris. Since arriving here in Australia in 1995 Leo has been performing both solo and in group collaborations as a juggler, clown, mime, unicyclist, comic waiter, physical comedian, stilt-walker and fire artist. Since living in Australia Leo has also travelled to various places to perform, including; France, New Caledonia, Indonesia, Taiwan, Qatar, Dubai, Hong Kong and Singapore

Philippe Wittwer was born in Switzerland. He began piano lessons at the age of 8 at a music school in Berne. In 1993 Philippe moved to London to study painting at the Chelsea School of Art. During this time he learnt to play the accordion, studying regularly with touring Romanian gypsies and also returning for master classes in Berne with Professor Sergio Castelli. In 1996 he co-founded the group Mukka, which became well known for its high-powered eastern European gypsy music, and included Romanian diva Dana Berciu.During this time Philippe also performed regularly in London venues, with a Polish violinist in an ensemble called Gypsy Voices.

From 1998 until 2002 when he left London for Sydney, Philippe performed regularly with theatre group The Cosmic Sausages.

Highlights of his performance career include; a live broadcast with Mukka on BBC World service, a recording session with the legendary John Peel that was broadcast on radio BBC1, and an appearance at Buckingham Palace for the Queens Golden Jubilee event.

His touring schedule has taken him all over Europe and the United Emirates. Festival appearances have included Glastonbury, Montreal Jazz Festival, Woodford, and Bellingen.
He has written and recorded music for several Films including My Left Ear, a series called The Incredible Adrenalini Brothers and TV commercials including Finnish Sauces.

Since arriving in Sydney in 2002 Philippe has worked in many line-ups that include Monsieur Camembert, Kush Cabaret, Plum Loko and Arabesk.

They are joined by the awesome talents of Veren Grigorov.

Born in Bulgaria where he was recognised as a child prodigy, Veren has studied at Conservatoriums of music in Vienna, Austria; Sofia, Bulgaria;and Sydney, Australia. Working in the capacity of musician, composer, performer and actor with the likes of Baz Luhrman, Barri Kosky, Rodney Fisher and INXS, Veren has also studied theatre in Hanover, Germany.

How to Book The Rosetski Brothers.

To Book The Rosetski Brothers conatct Vogue Entertainment on 1300 296 133 or email us.