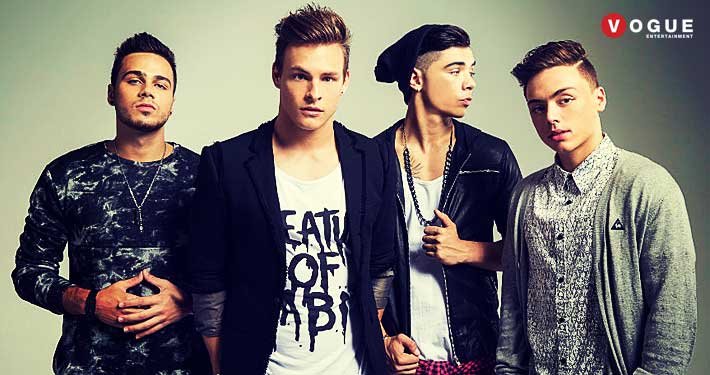 Life is a constant series of unexpected lessons. Take The Collective for example – young men catapulted to national attention off the back of The X Factor 2012 then immediate ARIA Top Ten success. However, once the initial adrenaline shot of fame wore off, they gained a true understanding of what it takes to succeed as a group and as artists in a very competitive industry.

The Collective had to learn a lot more about each other as individuals, and it’s paid off. Whether it’s Jayden’s knowledge of song structure, Julian’s tone and range, Will’s skills as an MC, or Trent’s natural leadership they all know what they can lean on to get the most out of their music.

Will sums it up; “Our differences are what make us stronger as a group.” Trent adds, “It’s been a steep learning curve. It’s not about the glamour; it’s about working hard. We’ve bonded closer, we’ve lost a member of the group, and the big thing we’ve learned is that we all have strengths and can pick each other up when we need it.”

There’s a new found determination in The Collective to grab hold of the next phase of their career, and this is encapsulated perfectly in their new single ‘Burn The Bright Lights.’

The song was served up by a couple of guns out of L.A., and when it hit The Collective they knew they had to record it.

“We wanted it right away,” Jayden explains. “On the surface it’s a romantic sort of song but we heard something beyond that side of things. There’s a power and emotion inside the song that everyone can relate to, no matter what they’re going through, and we wanted to bring that out.”

Trent adds, “We heard the passion, we heard our voices on it, and we thought ‘wow’ this is going to be a massive part of us, one big ballad that can touch a lot of people. In both verses it does relate to a female but it can relate to anyone – you’ve been scarred by the past and now it’s time to just burn the bright lights and forget about what has happened. Work the dream and work your life, it’s all about hope in the end.”

You get a really interesting outcome when a song actually reflects the emotional dynamic of the group themselves, which is exactly what has happened here.

“It really speaks to what we’ve been through and where we’re at now,” says Julian. “The sound is more ‘real’ and so is the passion behind it. We’re hoping people will see that we’ve matured as a group.”

“Maybe not as individuals,” laughs Will.

So now it’s time to get amongst the incredibly loyal legion of fans that have always stuck by The Collective.

Jayden: “Sometimes it’s overwhelming when we hear the stories that people share with us. It’s hard to get your head around the fact that what we do can make a real impact to someone’s life. We really want to do our best to give something back.”

The Collective achieved a lot very quickly and then discovered you don’t get to ride for free. Their experiences have galvanized them musically and personally, teaching that it’s not just talent, but also hard work, persistence and each other that counts.

This is admirable when you consider they didn’t form like ordinary groups – they were thrust together as strangers on a national TV show. The bond they’ve formed and music they make is testament to their individual strengths … and shows that they’re now truly ‘The Collective.’

The Collective’s new single ‘Burn The Bright Lights.’ is out now

How To Book The Collective

To book The Collective for your corporate event or festival, call Vogue Entertainment on 1300 296 133.