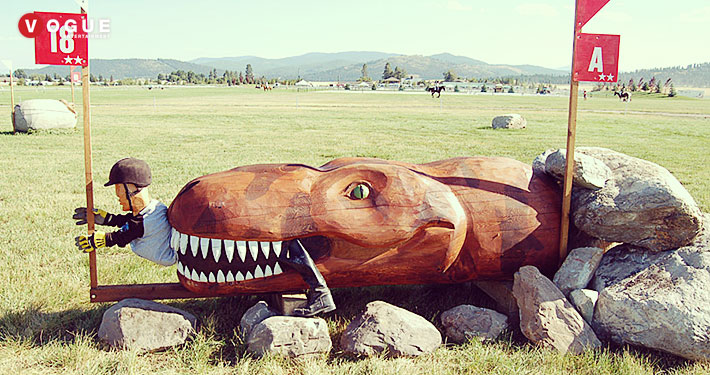 Mat began his career building horse jumps for impressive equestrian events such the Rolex Kentucky Three Day Event which is America’s premier equestrian event, watched by 70,000+ spectators on the ground at the Kentucky Horse Park, and millions on American television.

Langelier’s squirrels, Loch Ness monsters, ducks, fish, alligators, honey pots, armadillos and dinosaurs – measuring up to twelve feet long and seven feet high and doubling as cross country jumps – dot US event courses from Montana to Florida. In Australia, his handiwork has graced the Australian International Three Day Event in Adelaide ever since he carved a giant possum there with Australian Coursebuilder Craig Gordon in 2004.

The list of high-profile events that Mat has worked on include twelve consecutive Rolex’s, Badminton, the Sydney Olympics and the Australian International Three Day Event in Adelaide -Working with some of the world’s best-known course designers – including Mike Etherington-Smith, Captain Mark Phillips and Hugh Thomas.

But in recent years, it is not the big-name events that have drawn attention to the bearded thirty  year old. It is the big-scale chainsaw carvings he has left behind at those events. Now, when he goes to work on a new course, in addition to the usual array of oxers and trakehners, course designers also request feature chainsaw carvings.

Mat is now available for agriculture shows, festivals, fetes, fairs and all other suitable events showing off his talents when it comes to sculpting large size logs and demonstrating a craft rarely seen amongst the likes of suburban Australia.