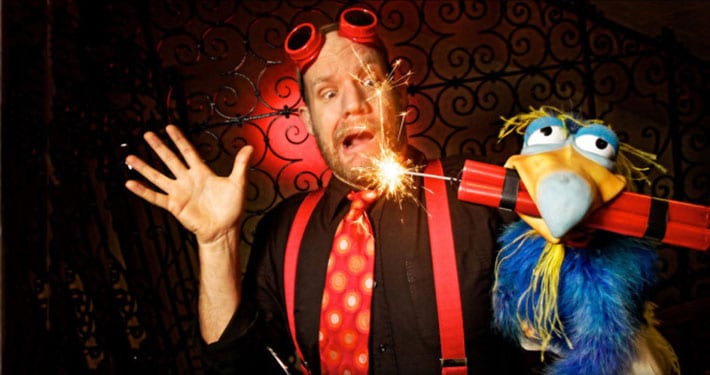 Tricky Nick knows how to WOW a crowd!

If you’re looking for a touch of insane magic (or magical insanity) for your next event, then Tricky Nick is your guy!

Tricky Nick is an experienced kids magician who has performed numerous times on Kids TV Shows and is often featured at government events for children and cultural festivals.

His shows are jam packed with comedy and magic, and have audiences and children giggling and gasping at the same time!

Rather than just tricking audiences, he explains the tricks behind the tricks, showing the reasons why we get fooled. How cool is that?

He is also a brilliant MC and knows how to keep an event flowing and moving along to schedule as well as entertaining and keeping the crowds entertained.

As well as being an amazing magician, he is also a bestselling author!

His new book for middle grade readers, ‘Tricky Nick’, hits bookshelves in May 2020.

What People Are Saying About Tricky Nick

“Once again you provided a fantastic show for us. To keep over a hundred boys on the edge of their seats for an hour is an amazing achievement.”
~ Scotch College, Melbourne

“Tricky Nick is a simply awesome children’s entertainer. This is top quality entertainment that packs a huge laugh!”
~City News

“Johnson, in his debut novel, has certainly dealt us an excellent hand, at once exciting and intriguing, along with a nice sprinkling of wry humour.”
~The Age